Dedication and One Goal 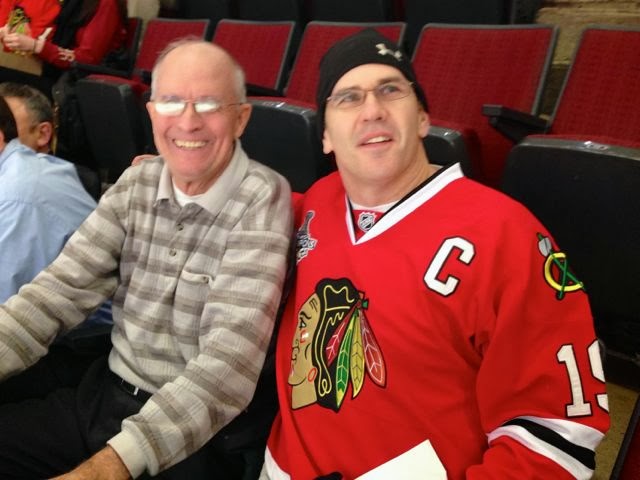 Family and financial commitments keep me from being able to get out very often. Tonight, me and my friend, Keith Sorensen were treated to a 7 - 2 Blackhawks victory over the Flyers at the United Center in Chicago. The game became exciting and entertaining after a slow start. For me, the real highlight was seated beside me in section 333, row 1, seat 18. Bob Gertenrich, a long-time Hawks season ticket holder, has been to each and every Blackhawks home game since 1966. Don't bother with the math, that's 2,175 games without a miss. It took just a few minutes into the first period for me to realize that I was sitting next to a shining example of living history.

Now 67, and stricken with serious arthritis, Bob stands proudly for the raucous United Center version of the Star-Spangled Banner, and he stands and cheers each Blackhawks goal. He is the picture of commitment and resiliency. He requires some assistance negotiating the stadium stairs, but his spirit is strong, as he stops to greet many of his friends along the way to the 3rd floor concourse. 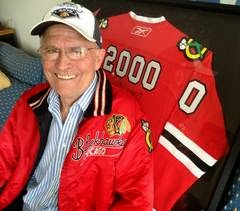 During the game, Bob shared numerous accounts about the players that he has met over the years. His stories included Bobby Hull, Stan Mikita, Steve Larmer, Dennis Savard, and his current favorite player, captain, Jonathan Toews. Talk about having a sharp mind, Bob recited scores, described opposing players, and snapped off statistics from games I remember attending as a teenager in the mid 1980s.


I asked Bob where he was when the Hawks turned the tide against the Boston Bruins in 17 seconds during last season's game 6 of the Stanley Cup Finals. "I was watching from a friend's house. I had tickets to game 7, which was on my birthday. I was feeling superstitious, and I didn't want to feel responsible for a game seven loss. I was relieved after that amazing turnaround, I went out to celebrate. I still have those game 7 tickets. I have all of the tickets!"

It was a pleasure listening to Bob talk about the rules of the game, how ticket prices have increased over the years, and some of the more memorable games that he has seen. He patiently answered all of my hockey questions. Before heading to the exits, I told Bob that I would be back later this season. I promised him a bucket of popcorn, and he promised more stories. I can't wait! Next time I am feeling too tired, too sore, or too sorry for myself, I will think about Bob Gertenrich's grit, and his undying dedication to the team that he loves. Go Hawks!