Is One-to-One A False Summit?

July 23, 2014
"How great would it be if every student could be connected to every other student by a web connected device?" This was my guiding question, and quickly became my quest, as I accepted a position as technology coordinator twelve years ago. This was before smart phones, iPads, 802.11ac, and 4G networks. One-to-One learning had yet to become an educational catch phrase, and our media-rich classrooms consisted of a desktop computer, a VCR, and a 600 lumen multi-media projector. Regardless of the name, a computer for every student was going to be my trophy. It would become my legacy as "the tech guy". Years later, as we are about to distribute iPads to all of our students, I have come to realize that I was aiming at the wrong target.

Today, while eating fresh at Subway, I began whining about my revelation to my friend and colleague, Keith Sorensen. Not only does he usually pay for lunch, he's also one of the few people I know that will sit and listen to my wacky musings for any length of time, which is usually as long as the food holds out. Being a sensitive listener, Keith agreed that my glorification of finally going 1:1 was "a false summit". After nearly choking on a slice of green pepper, I composed myself enough to ask for clarification. He was right, putting a tablet in every kid's hands can certainly be an educational game-changer, but the tech implementation is only a means, not an ends.

"It's only a tool, and it's only the beginning.", he reminded me. "What is the change you really want?", he asked. 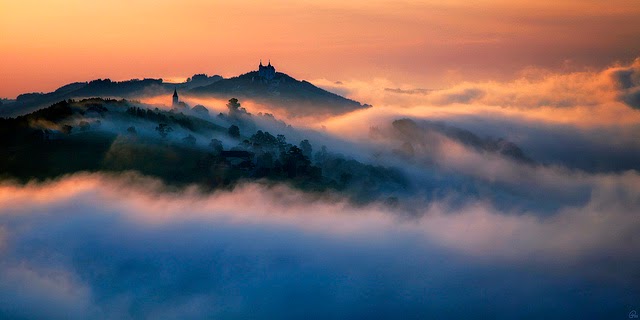 I looked inward and upward, as I tend to do when I am measuring my words, took a deep, cleansing breath, and said, "First, I want every learner to be connected to every other learner through social networks. Second, every person has a story worth telling. I want every learner to share their thoughts, experiences, and accomplishments their own digital portfolio."

"Now! That's a peak where you can stick your flag!", said Keith as he pointed a spicy nacho Doritos chip at my face, for emphasis.

Those weren't his exact words, but it was good to hear his validation of my new peak. Providing an iPad for each of our 15,000 students and staff is a tall order complete with falling rock, and slippery slopes. One-to one learning will help close the opportunity gap for many of our students. However, this endeavor represents mere handholds and footholds on the climb to a more noble summit. The magic of 1:1 isn't air play, gorilla glass, or the lightning connector. It's the ability connect, learn, and share with anyone at any time. The iPad is an enabler of learning relationships.

Tablets were inherently designed to be personal learning devices, which is perfect. Despite arguments to the contrary, learning is a personal endeavor. Most of our waking hours are spent learning stuff that holds significant meaning to our being. I close with Steven Anderson's tweet - it reinforces the theme of this post most appropriately.

What, if any, false summits have you encountered?

What did you do when you discovered the higher peak?

Unknown said…
The phrase "false summit" was used in the movie Lone Survivor where a small group of soldiers are trying to reach the peak so they can escape danger, only to find that there was a larger peak looming behind it.

Giving every student a device should never have been our summit, but unfortunately I think it was the only thing we could see from where we were standing two years ago. As we reached that summit (every student will get an ipad in August 2014) we realized how much further we have to climb (utilizing technology to learn, grow, produce, and change).

Robert Schuetz said…
Thanks Keith - this is a terrific explanation of our perspective. I agree, the view is different from the summit that we are currently on. Bob
July 24, 2014 at 10:46 AM