My COVID Side Hustle; "Uncommon Ground"

July 24, 2021
“SAVE THE LAKE!” That was the battle cry of Sommers and his unusual group of friends as they struggled to preserve the natural beauty and retain the quiet comforts of life on Lake Victoria. But, with time running out, would they be able to overcome forces of nature, crooked cops, greedy politicians, and violent gangsters? 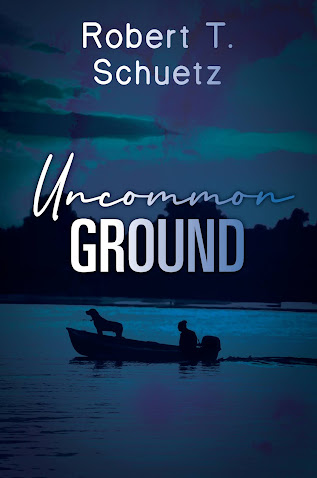 Well, those of you who subscribe to or follow this blog were probably wondering where I've been for the past year; no posts, very few tweets. "So what did Schuetz do during COVID? What's going on with him?" Many of you may not have known I went off the social media grid during the past twelve months. No matter, we're here together now.
Like many of you, this past year was full of immense change, some of it good, some, not so much. But, it was also a year for some soul-searching and awakening. My remaining hair turned grayer, I gained a few unnecessary pounds, and I got back into coaching football, fun under the Friday night lights.
Oh, that's right, and I wrote a book. It's a fictional yarn called "Uncommon Ground." The book has recently gone to print. Writing a novel has been on my bucket list for several years; the past year of strange new normalcy afforded me some time to finally sink my teeth into this emotionally satisfying project. As a result, I spent many early-morning hours writing down in our basement, the dungeon as I like to call it. I can't explain why my most productive writing took place pre-dawn.
I dedicated an hour or two each day to writing and re-writing with my socially distanced parents, Terry and Lynae, providing creative suggestions and proofreading services. So what did I learn in the process? First, I learned that good writing, interesting writing, much like anything else, takes practice, many hours of practice. Ten thousand, who knows, Gladwell might be on to something. Then, four hundred pages into a lengthy Google Doc, I recognized improvements in my writing mechanics and rhythmic patterns. Finally, I became more specific with my word choices and read quotations aloud to feel how the characters would sound. Thank gosh for auto-save, revision history, spellcheck, and an online thesaurus.
The compelling story, let's call it an action-adventure, takes place in Northwest Minnesota, where reclusive and humble Dale Sommers struggles to save eight hundred acres of waterfront property, which has belonged to his family for generations from a furtively hostile acquisition. To Sommers, Lake Victoria is unlike any other place on earth; it's the only place he's ever called his home. However, as the tension mounts and the drama unfolds, we learn that Sommers and his few close friends are ordinary people with uncommon heroic virtues. They'll need courage and teamwork to save the day and save the lake. 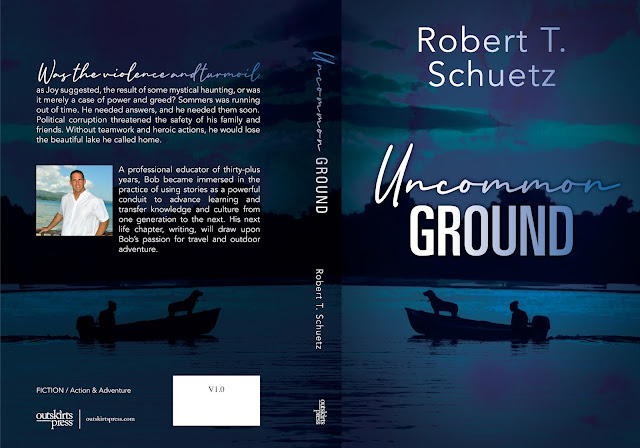 Is there a soundtrack, you ask? Actually, the chapters are spotlighted with songs of summer, songs of the lake, and songs that I like. You can sing along with the "Uncommon Ground" soundtrack here on Spotify. I'll be sharing more details soon but be on the lookout for "Uncommon Ground" on Amazon or at another favorite book retailer. Regarding book sales, I plan to donate a portion of my royalties to The Conservation Fund, and I hope you will consider making a donation, as well. "The Conservation Fund works to protect America’s most critical lands and waters; providing greater access to nature, strengthening local economies, and enhancing climate resiliency."
With a bit of momentum on my side, I've already started outlining book two. You will hardly believe the pickles Dale, Grumpy, and Phelps find themselves in during the next go-'round. Happy reading and happy writing!

Aaron Davis said…
Thank you for the update Bob. Sounds like an exciting side hustle. Look forward to reading it.
July 25, 2021 at 6:30 AM

Robert T. Schuetz said…
Thank you, Aaron and Fatimma. The writing is partially redemption and partially creative therapy. I think it's a good story - I hope others feel the same. Thank you for reading and posting.
Bob
July 26, 2021 at 4:08 PM

Board Games in the School Library: 3 Reasons Why It's a Winning Play

January 15, 2017
"Play is the highest form of research."  - Albert Einstein “Play is the work of the child.”  – Maria Montessori In our recently remodeled school media center, we have a space dedicated to active engagement in fun learning activities. Part maker space, part literacy lounge, board games are being incorporated to promote a culture of joyful learning. Whether it's a game of Rummy , Yahtzee , or Scrabble , family game night serves as a communication elixir and solidifies our domestic climate of togetherness. Shouldn't similar opportunities for interaction, challenge, and fun exist somewhere in our schools? Broken families, cultural fragmentation, and poverty are impacting opportunities for children to play. As we unpacked and tagged our new media center games, I was more disappointed than shocked by the number of students who had never played Monopoly , Boggle , or Sorry . One skeptical teacher commented, "Oh great, now we're letting students pl
2 comments
Read more